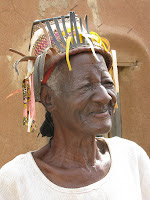 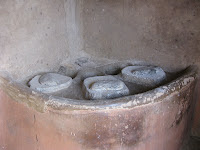 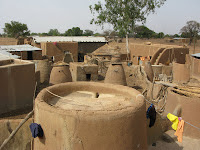 According to my guide book in Paga, you can visit Pia's Palace, which is supposed to be a great example of an extended family compound. We drove by, and it looked like a cheesy tourist thing, and decided to skip it. The reason I was originally interested in it was because the architecture of the huts are different near Paga than in Nalerigu.

As I said in my last post, a nurse, Kate, came with us because she is from the area and wanted to see her family. She brought us to her mother's house, which is exactly the style hut I wanted to get a closer look at. Her family was so gracious in giving us free access to tour the compound, the top picture is her mother fooling around with a basket on her head.

What is different with these huts is that they do not use thatched roofs. Instead they have flat mud roofs that they have stairs up to. The roofs are multi-functional, they can then be used as sleeping quarters in hot weather or to dry things out.

The 3rd picture above was taken as I stood on the roof of one hut and overlooks the entire compound. The center of the compound is a pen to hold their cows. The small domed shaped huts are equivalent to what we would call silos. You can see stairs up to another roof if you look in the back right corner. Also in the front left corner, one hut has no roof, but some thatching just laying there, that is used as one of the kitchens.

The 2nd picture was also taken in the house. Who can guess what that is?

We had alot of fun at the compound, thanks to Kate!

Dr. Hewitt also took us to the Bolgatanga market. Bolgatanga is a much larger city than Nalerigu, and rightly their market is much larger. We enjoyed walking through all the alley ways with Dr. Hewitt, who is fluent in the language. We were looking for these baskets that are local to the region, actually the same one on Kate's mother's head. We found them, but unfortunately they only had large baskets that could not be packed in a suitcase. It was fun still. He also earlier in the day took us to a fantastic fabric store. I think the owner enjoyed our visit because we gave them quite a bit of business.
Posted by ESK123 at 4:46 PM

part of a cistern?

Good guess, but no.

is this where they store their milk to keep it cool?
Mom