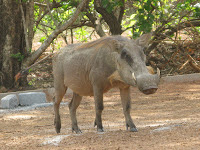 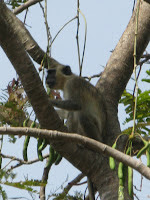 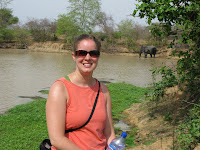 After much scheming, dreaming, planning, re-planning, praying, packing....this weekend my roommate and I headed to Mole National Park to go on safari! I had been dreaming of this trip since my last trip to Africa when I missed out on safari.

Not only did we go on safari, but we had decided to make it a true adventure (and in our budget) so we took all public transportation to and from the park!

I took:
-bus
-tro-tros (take a van, and put in about 20+ people, add more to the roof, and you have a tro-tro)
-hitchhiked (NOT in the true sense that we were actively seeking a ride, but in the sense that we were walking when we were offered a ride)
-moto (this was scary, very scary, but I'll have to post later about some of my getting to and from adventures)
-taxi
-walked

The Lord was so good to us because public transport in Ghana comes with alot of baggage, and miraculously we ran into relatively few problems. We made every connection we planned out. The Lord went before us in this entire adventure from the most small detail (like someone telling us we needed a bus ticket the night before, and we got one of the LAST tickets) to the big details (seeing those elephants!).

Ghana is not known for it's animals and it lacks many of the big animals (aka lions), but I was just so excited for the opportunity to go and the support from the hospital to let us go. Mole National Park is located 56 km outside of Tamale, down one of the worst roads in Ghana. The park has one motel, which is situated on top of an escarpment (ridge), overlooking two main watering holes in the park. So we could look out our hotel window, and see monkeys, warthogs, etc. We ate breakfast with elephants bathing in the watering hole below!

We actually only spent about 24 hours at the park, but it was well worth the trip! I can't remember the last time I lost sleep because I was so giddy about a trip (I was like a little kid Christmas eve). We went on an evening and morning walking safari, it's one of the few places in the world, where you can go on foot with an armed ranger.

If the location of the hotel wasn't cool enough, the hotel had AIR CONDITIONING and a SWIMMING POOL!!!!! I won't let people tell me how hot it is outside because it would depress me. But Elisabeth Faile let it slip the other day that it was 107 IN THE SHADE! So with that in mind, you can imagine how excited we were with air conditioning!

I wish I could express to you just how blessed I feel to have been able to enjoy such a great weekend! I hope through pictures and a few stories, you'll see a glimpse of it.
Posted by ESK123 at 3:47 PM

Way to go Biffy!! I know how much this trip was thought about and am so glad that you really got to do it. What a wonderful experience and I am sooo glad you got to do it. Love, Mom

How much fun! I can just imagine the singing, dancing firemen.

So, what exactly is the first animal in the picture, do we get to see a picture of an elephant up close, and when do we get to know what the non-cistern thing really is?

What are the green pods in the tree with the monkey?