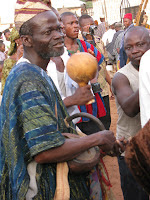 About a week ago, we were told that there was going to be a festival in town. We could only get vague details about it. In fact, no one really knew WHEN it was. Some said it pasted already, some said it was Tuesday, some Wednesday, etc. It was yesterday. Dr. Faile kindly pushed us out of clinic so we could attend, and we had no idea what was in store for us.

We headed out for the chief's palace to find a massive crowd gathered. A little Ghanaian kid greets us saying, "Suliminga (foreigner), you are LATE!" We break out laughing, when in Africa is anything late. It's looking like there is no possible way we are going to get close enough to see, when the crowd parts for the white people. Next thing you know, we are in the front row and being led towards the chiefs.

I should mention as soon as we get to the front a old time musket gun shoots in the air about 5 feet in front of us, and I startle like crazy. The gun will continue to go off every few minutes the entire time the king is out, and I continue to jump, which just sets the crowd off to roaring laughter. We meet up with one of the princes, which there are many, being that we learn the king has about 17 wives (I've meant to do a post about polygamy, we'll have to save my thoughts on that for another day), but he is the one who then grants us permission to take photos at will and gives us access to go in the palace, and even attempts to keep the militia people with their muskets far away from me.

The first part of the celebration is the chiefs and important people dancing for the king, who mustn't stay out past sunset. There's drummers EVERYWHERE, and they follow the dancer around. Here when you dance, people pay you. Actually they try to stick coins to your forehead. Oh and to tell who is important, they wear these colorful smocks, which kind of remind me the bajas people used to wear. So swarms of people, guns, and dancing. Eventually though the king is led in procession back to the palace, before the sun sets.

We were invited in the palace, which is like a very large compound of huts. Each wife has her own hut. We head home after this, very happy we went.

BUT we knew it wasn't over, the dancing will continue all night long, Christy #1 and I return around 8 pm, we again get the royal treatment, and end up in chairs sitting with the chiefs! And by God's providence, the swarms of children that are attracted to us, kept us out of reach for the drummers and dancers to come for coins. We stayed for another 2 hours, seeing all the traditional instruments and dancing. It was fun.

We learned that when the sun rises, the king will come back out and bless those who are there. We had to round at the hospital at 7:30am, but Christy #1 and I got back up there around 6am. We unfortunately missed seeing the king, but we did get in more dancing. This time we didn't get pushed to the front, but we were given a bench to stand on.

By the way, two of the times we made it to town, we were picked up by cars! Christy and I found this so funny because almost no one owns a car in Nalerigu. Granted many out of towners came for the festival, but of the maybe two cars in Nalerigu, we got free rides from both!

It was such a fun surprise because we had no idea what to expect! And it is nothing like any festival I've been to in America.

PS For the past 2 hours I have attempted to load a short video clip to no avail, I will have to settle for a picture. I owe you more in the future. I do have nice clips of the dancing and drumming, maybe when I get back to the states I can load it.
Posted by ESK123 at 5:15 PM

What a wonderful experience!! I can't imagine all the colors, noise, and excitement of this festival. Thankfully Dr. Faile was wise enough to send you there. Mom

Hi Biffy,Ben just sent me your blog so I caught up with you and what will be a life and soul changing experience and blessing at the same time!!I think I told you I was there in 1970(I know I don't look that old!!} Seeing the pics of especially the children brought back great memories and the snake stories which I HAD forgotten about!! Not only did they drop from trees by us there was the black mamba which I had one close encounter of the scary kind!!mrs.h